Skip to main content Skip to navigation Skip to footer 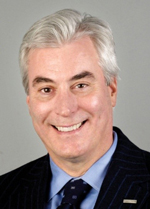 On June 30, 2015, Gregory H. Wingfield retired after 40 years as a professional economic developer in the commonwealth of Virginia.

In July 2015, he joined Virginia Commonwealth University’s L. Douglas Wilder School of Government and Public Affairs as a Senior Fellow on a part-time basis. Wingfield is working on a variety of projects, including work in the Center for Urban and Regional Analysis.

Additionally, he formed GHWingfield Consulting, LLC to undertake consulting work with a variety of economic development groups in the southeast U.S.

During the last 21 years, the Partnership has assisted numerous high profile companies including Genworth, Brinks, Philip Morris USA (their headquarters and research/development), Altria and MeadWestvaco. The 465 businesses recruited from 1994 through 2015 have committed $10.8 billion in new investment. The region has also added 75,000 net new jobs over this same period of time.

The Partnership, seven times since 1994, has won accolades as one of the top economic development groups in the nation. In addition, the region three times achieved “Top Deal” recognition from Site Selection magazine for pulling off the nation’s biggest top-dollar projects.

Greg earned his bachelor’s and master’s degrees in urban and regional planning from VCU and began his career as a planner with state and regional agencies and as director/manager with the Virginia Department of Housing and Community Development.

From 1984 to mid-1987, he was marketing manager with the Virginia Department of Economic Development. Then, for seven years, before coming back to Greater Richmond, he was president of Forward Hampton Roads, the economic development arm of the Hampton Roads Chamber of Commerce in Norfolk, Va.